Part of project proposal I’m working on currently is the network (re)construction of geographical locations. For a first experiment I used a publicly available data set provided by Flickr that contains 100 million photos of which 49 million are geotagged. It can be found here. The dataset consists of 10 TSV files holding the information (like id, geotag, user, etc.) of 100.000 photos each.

I used Apache Spark for the preprocessing of these files and converted it into a GraphX graph. An Edge between locations exists if at least 2 persons visited both and locations are less then 10 degree apart.

Using Spark the resulting vertices and edges where written to disk and transformed to a JSON object holding these values. Using D3.js (world rendering, top) and Processing.js (acyclic BFS rendering with starting point Vienna, bottom) this JSON object was loaded and the network projected onto a Miller and azimuthal projection respectively. Vertices where drawn as translucent circles whose overlap creates different color intensities on the map according to the popularity of the location. Edges where drawn as translucent arcs with weighted line width that highlight highly connected vertices via overlapping. The final renderings are based on ~170.000 vertices and over 4 million edges. 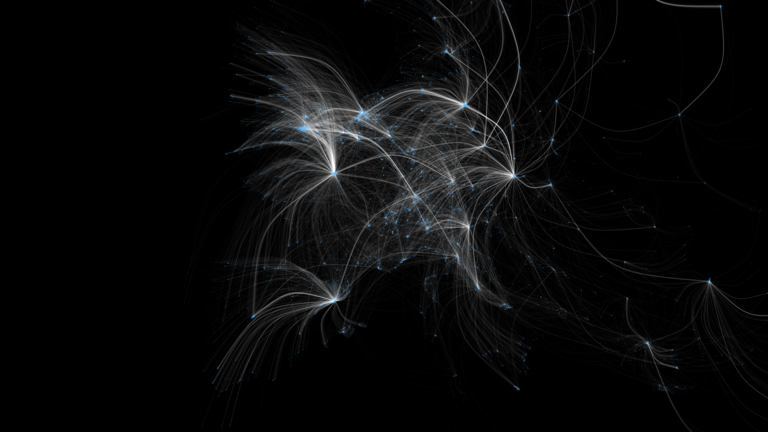